On the Encoding tab in the file type configuration, you can indicate how EditPad should encode and decode files of a particular type. 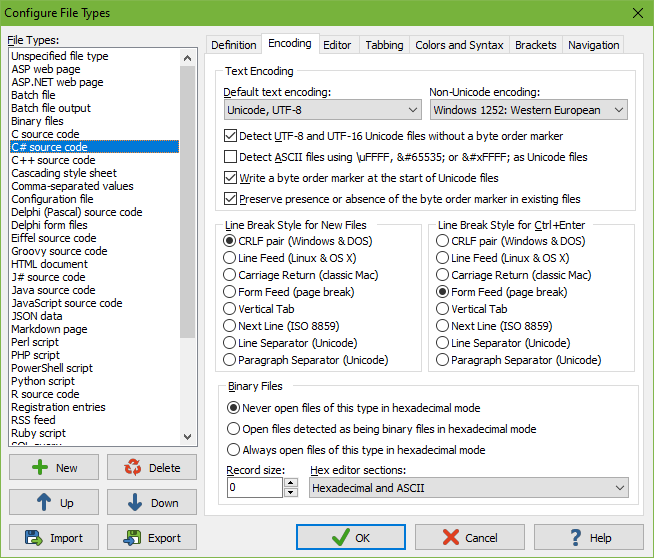 In addition to conversion problems, the main problem with using traditional character mappings is that it is impossible to create text files written in multiple languages using multiple scripts. You can’t mix Chinese, Russian, and French in a text file, unless you use Unicode. Unicode is a standard that aims to encompass all traditional character mappings, and all scripts used by current and historical human languages.

If you turn on the option “preserve presence or absence of the byte order marker in existing files”, then EditPad will keep the BOM in files that already have it, and never add it to Unicode files previously saved without a BOM. When preserving the BOM or its absence, the option “write a byte order marker at the start of Unicode files” is only used for files that you newly create with EditPad and for files that you convert from a non-Unicode encoding to Unicode. Non-Unicode files cannot have a BOM. So there is no presence or absence of the BOM to maintain if the file was not previously Unicode.

To auto-detect UTF-8 files, EditPad Pro checks if the file contains any bytes with the high order bit set (values 0x80 through 0xFF). If it does, and all the values define valid UTF-8 sequences, the file is treated as a UTF-8 file. The chances of a normal text document written in a Windows code page being incorrectly detected as UTF-8 are practically zero. Note that files containing only English text are indistinguishable from UTF-8 when encoded in any Windows, DOS or ISO-8859 code page. This is one of the design goals of UTF-8. These files contain no bytes with the high order bit set. EditPad Pro will use the file type’s default code page for such files. This makes no difference as long as you don’t add text using letters outside the English alphabet.

Reading a UTF-16 file as if it was encoded with a Windows code page will cause every other character in the file to appear as a NULL character. These will show up as squares or spaces in EditPad. EditPad can detect this situation in many cases and read the file as UTF-16. However, for files containing genuine NULL characters, you may need to turn off the option to detect UTF-8 and UTF-16 files without the byte order marker.

If the presence or absence of a BOM is important to you then you should turn on the Unicode signature statusbar indicator. It indicates whether the file has a BOM or not. You can click the indicator to add or remove the BOM if you selected to preserve its presence or absence for the active file’s file type.

If the differences in character mappings weren’t enough, different operating systems also use different characters to end lines. EditPad automatically and transparently handles all eight line break styles that Unicode text files may use. If you open a file, EditPad maintains that file’s line break style when you edit it. EditPad only changes the line break style if you use Convert|Line Break Style.

Unfortunately, many other applications are not as versatile as EditPad. Most applications expect a file to use the line break style of the host operating system. Many Windows applications display all text on one long line if a file uses UNIX line breaks. The Linux shell won’t properly recognize the shebang of Perl scripts saved in Windows format (causing CGI scripts to break “mysteriously”).

Making the wrong choice here causes no harm. You can instantly switch between text and hexadecimal mode by picking View|Hexadecimal in the menu. Unlike many other editors, EditPad Pro will preserve the exact contents of binary files even when you view them in text mode. Even files with NULL characters will be properly displayed in text mode. (Many applications truncate text files at the first NULL, since that character is often used as an end-of-data signal.)