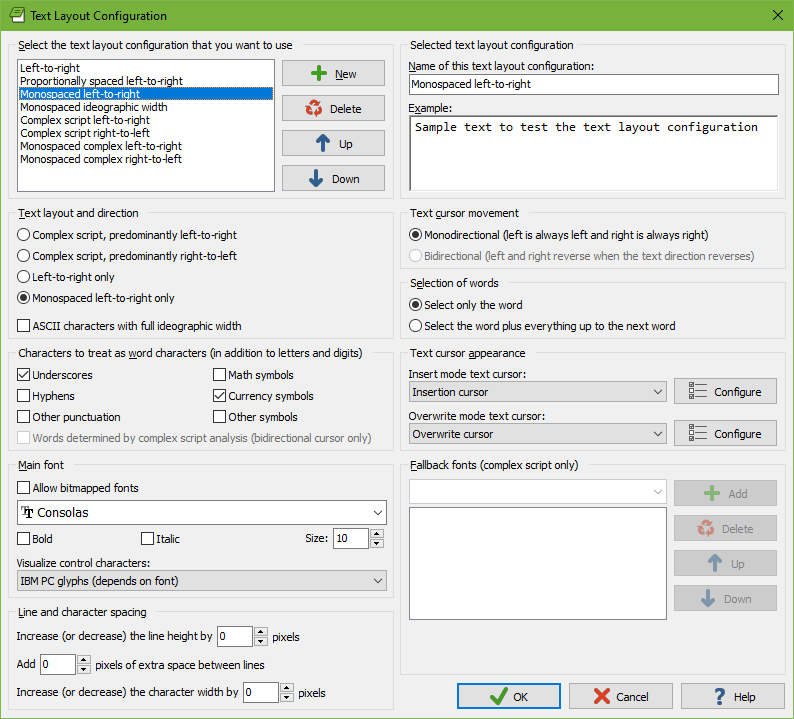 Select The Text Layout Configuration That You Want to Use

Click the New and Delete buttons to add or remove layouts. You must have at least one text layout configuration. If you have more than one, you can use the Up and Down buttons to change their order. The order does not affect anything other than the order in which the text layouts configurations appear in selection lists.

In the Example box you can type in some text to see how the selected text layout configuration causes the editor to behave.

Character Sequences to Treat as words

If you selected the “bidirectional” text cursor movement option then you can turn on “words determined by complex script analysis” to allow Ctrl+Left and Ctrl+Right to place the cursor between two letters for languages such as Thai that don’t write spaces between words.

Select a predefined cursor or click the Configure button to show the text cursor configuration screen. There you can configure the looks of the blinking text cursor (and even make it stop blinking).

Select the font that you want to use from the drop-down list. Turn on “allow bitmapped fonts” to include bitmapped fonts in the list. Otherwise, only TrueType and OpenType fonts are included. Using a TrueType or OpenType font is recommended. Bitmapped fonts may not be displayed perfectly (e.g. italics may be clipped) and only support a few specific sizes.

If you access the text layout configuration screen from the print preview, then turning on “allow bitmapped fonts” will include printer fonts rather than screen fonts in the list, in addition to the TrueType and OpenType fonts that work everywhere. A “printer font” is a font built into your printer’s hardware. If you select a printer font, set “text layout and direction” to “left-to-right only” for best results.

Not all fonts are capable of displaying text in all scripts or languages. If you have selected one of the complex script options in the “text layout and direction” list, you can specify one or more “fallback” fonts. If the main font does not support a particular script, EditPad will try to use one of the fallback fonts. It starts with the topmost font at the list and continues to attempt fonts lower in the list until it finds a font that supports the script you are typing with. If none of the fonts supports the script, then the text will appear as squares.

To figure out which scripts a particular font supports, first type or paste some text using those scripts into the Example box. Make sure one of the complex script options is selected. Then remove all fallback fonts. Now you can change the main font and see which characters that font can display. When you’ve come up with a list of fonts that, if used together, can display all of your characters, select your preferred font as the main font. Then add all the others as fallback fonts.

By default all the spacing options are set to zero. This tells EditPad to use the default spacing for the font you have selected.

If you find that lines are spaced apart too widely, specify a negative value for “increase (or decrease) the line height“. Set to “add 0 pixels of extra space between lines”.

The “increase (or decrease) the character width by ... pixels” setting is only used when you select “monospaced left-to-right” only in the “text layout and direction” list. You can specify a positive value to increase the character or column width, or a negative value to decrease it. This can be useful if your chosen font is not perfectly monospaced and because of that characters appear spaced too widely or too closely.