On the Keyboard tab in the Preferences screen, you can change the shortcut key combination for each item in EditPad’s main menu. 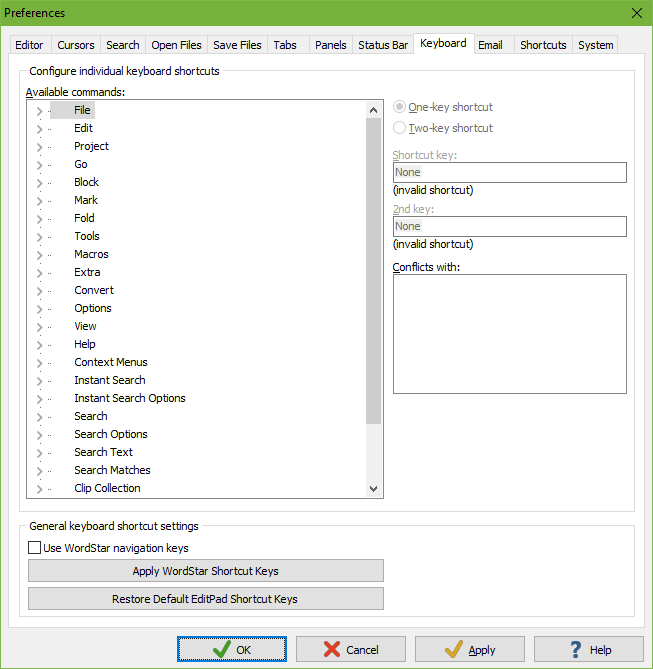 You can also assign shortcut keys to tools and to macros when configuring tools and recording macros. You cannot assign the same shortcut key to both a menu item and a tool or macro.

EditPad supports the classic Wordstar navigation keys for people who are used to them. WordStar is an old word processor that used Ctrl+Letter key combinations to navigate through the document. WordStar was created at a time when most keyboards did not yet have separate arrow key blocks. The checkbox only enables the navigation keys. It does not change any of the key combinations that you assigned to EditPad’s menu items. Note that many of these navigation keys conflict with standard Windows shortcut keys. E.g. Ctrl+S is the standard Windows shortcut for File|Save. In WordStar, Ctrl+S moves the text cursor one position to the left, just like the left arrow key.

Click the “Apply WordStar Shortcut Keys” button to assign WordStar key combinations to various menu items. E.g. Ctrl+K, S will be assigned to File|Save. Shortcut keys assigned to EditPad menu items that don’t have a WordStar equivalent will not be changed. The assignment is a one-time event. You can freely reconfigure any of the changed keys.

Click the “Restore All Default Shortcut Keys” button to restore the default EditPad shortcuts for all menu items. It will also turn off the option to use WordStar navigation keys, since many of those conflict with EditPad’s default shortcuts.