On the Cursors tab in the Preferences screen, you can configure the appearance of EditPad’s mouse pointer. You can also configure how EditPad responds to the navigational keys on the keyboard. 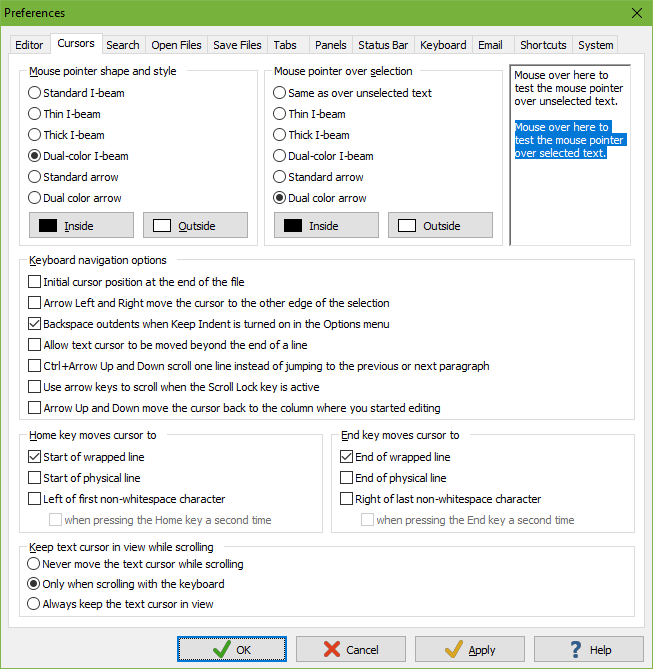 EditPad Pro allows you to select the mouse pointer shape and style. “Standard I-beam” is the standard mouse pointer for text editing controls, typically an I-shaped beam. “Thin I-beam”, “thick I-beam” and “dual-color I-beam” are custom EditPad cursors for which you can pick your own colors. By choosing colors that contrast well with the background color you’ve chosen for the editor, you can make the mouse pointer highly visible. “Standard arrow” is the regular Windows mouse pointer. “Dual color arrow” is another custom EditPad cursor in the shape of an arrow.

EditPad’s custom pointers may not work in all situations. Some remote desktop software, for example, cannot handle them. The mouse pointer may either be incorrectly displayed, or simply be invisible. In that case, simply select one of the standard pointers, which always work.

If you turn on Keep Indent in the Options menu or in the editor options in the file type configuration then pressing Enter to create a new line automatically duplicates all whitespace at the start of the previous line onto the new line. When Keep Indent is on, there are two ways in which the Backspace key can delete this whitespace at the start of a line. If you turn on “Backspace outdents” then pressing Backspace deletes as many whitespace characters as needed to line up the cursor with the previous indentation level. That is the amount of spaces used to indent the first line before the line the cursor is on that has less indentation than the horizontal position of the text cursor when you press the Backspace key. So if you start with a blank file, type 3 spaces, type text, press Enter (which indents the new line by 3 spaces), type 3 more spaces, type text, press Enter (which indents the 3rd line by 6 spaces) and then press Backspace, then 3 spaces are deleted to line up the cursor with the first line’s indentation. Pressing backspace again deletes 3 more spaces. If you turn off “backspace outdents”, then pressing Backspace always deletes one character. This option has no effect when Keep Indent is off. In that case backspace always deletes one character.

In Windows text editors, pressing the Arrow Up or Down keys on the keyboard keeps the text cursor on the same column. For example. if you put the cursor on line 1, column 1 of an existing text file, type “abc”, and then press Arrow Down, then the cursor will be on line 2, column 4. If you type “abc” on the 2nd line, it will be “stair-stepped” relative to the “abc” on the first line. If you turn on the option “Arrow Up and Down move the cursor back to the column where you started editing”, then in the previous example, pressing Arrow Down moves the cursor to line 2, column 1. The horizontal movement caused by typing “abc” is undone by pressing Arrow Down. If you type “abc” on the second line, it will appear just below the “abc” on the first line. The result is that turning on this option makes it much easier to edit data arranged in columns.

By default, EditPad Pro keeps the text cursor visible when you scroll with the keyboard (by pressing Ctrl+Arrow Up/Down or Ctrl+Page Up/Down), but not when you scroll with the scroll bars or by rotating the mouse wheel. This is how most text editors for programmers work. EditPad Pro gives you the choice. Most general-purpose text editors do not allow keyboard scrolling at all.